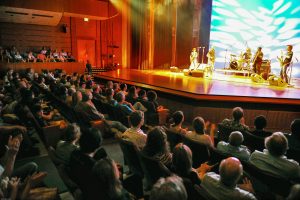 The 2016-17 season at the Weis Center for the Performing Arts at Bucknell University features 35 events from across the United States and around the world and includes Americana/folk, classical, jazz, world music, dance, a Family Discovery Series and much more. Six performances are free.

Highlights from the new season include:

Hardcopies are also available at the Weis Center and later this summer will be placed throughout the Bucknell University campus and Susquehanna River Valley region.

To request a hardcopy brochure, contact Lisa Leighton, marketing and outreach director, at 570-577-3727 or by email and one will be mailed to you at no cost.

The majority of Weis Center tickets range in price from $15 to $35 for adults, with discounts available for subscribers (5 or more events), senior citizens, college students, groups and youth.

Tickets will also be available in person from several locations including the Weis Center lobby weekdays 10 a.m. to 4 p.m. and the CAP Center Box Office, located on the ground floor of the Elaine Langone Center, weekdays, 10 a.m. to 4 p.m.